Chinese plug-in vehicles market in 2017 became twice as big, as the US one.

Interesting trend of China’s leadership in EV adoption is confirmed by 2017 sales statistics. Despite the giant annual amount of new vehicles registration in the region, PEV cars share becomes higher and higher from year to year.

Rapid growth of plug-in vehicles market in China started in 2013 and continues up to date – their market share risen from 0.1% to 2.3% in five years. Such result is an outcome of automakers’ increased product range, as well as effective government incentives.

On the other hand, despite the US market is still one of the largest in PEV segment with a great variety of vehicles to chose, its share grows much slower – from 0.6% in 2013 to only 1.1% of annual new vehicle registrations in 2017.

One the graphs below you can check the market dynamics in China and the USA – red is for plug-in hybrids, gray – electric cars. The data is a courtesy of United States Department of Energy. 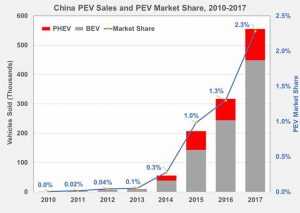 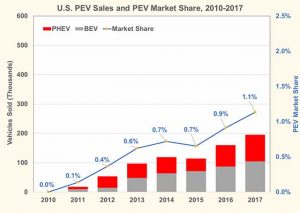 All-electric cars and plug-in hybrids ratio in total amount of sales is another interesting point. As we can see, in 2017 all-electric cars account for about 81% of PEV sales, while in the US – only for 53%.

Highest possible benefits of purchasing an electric car is one of the measures Chinese government takes to improve the ecological situation in the region. Thus, 2017 sales statistics is a next confirmation for government incentives effectiveness for the EV market.