The biggest growth is shown by hybrid vehicles – 62.1% increase compared to Q1 2016. However, all-electric cars are also going strong, with 49% increase and a total of almost 25,000 vehicles sold throughout the Q1 2017. Interestingly, US market shows pretty same results with 49% increase of EV sales, though the total market volume in figures is about 16% larger.

Renault Zoe is taking a huge piece of market with 14.7% share in Q1 2017. Nissan Leaf, BMW i3, Tesla Model S and Tesla Model X are other electric vehicles to make the top-5 of best selling EVs in Europe. The chart below shows the general statistics for each model with 2016 comparison. 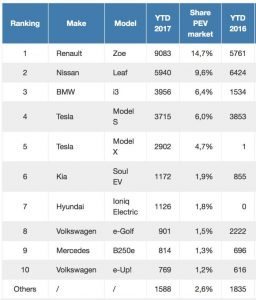