During the first fatal crash with Tesla Autopilot involved, NHTSA not only determined the car’s equipment to be guiltless, but also came to intriguing conclusion on self-driving vehicles.

The accident happened in May 2016 at the highway in Florida – Tesla Model S driving on Autopilot crashed into a massive truck, leading to Tesla driver’s death. The autopilot’s camera did not recognize the truck’s white body considering the bright sky on the background. By the way, similar crash possibility is very unlike today since Tesla 8.0 software uses radar as the main autopilot unit.

In order to examine the accident, NHTSA reconstructed the crash and found out that the Tesla driver must have seen the truck not less than 7 seconds before the impact, which leaved him enough time to escape the crash. Moreover, NHTSA also claimed that Tesla Motors warns drivers about the necessity of keeping the control over the car even while driving with Autopilot.

NHTSA also examined the crash data involving Tesla Model S and Model X made from 2014 till 2016. The research showed that the number of road accidents with those cars reduced by 40% after the Autosteer function had been released – crash rate dropped from 1.3 accidents per 1 million miles to 0.8 crashes. 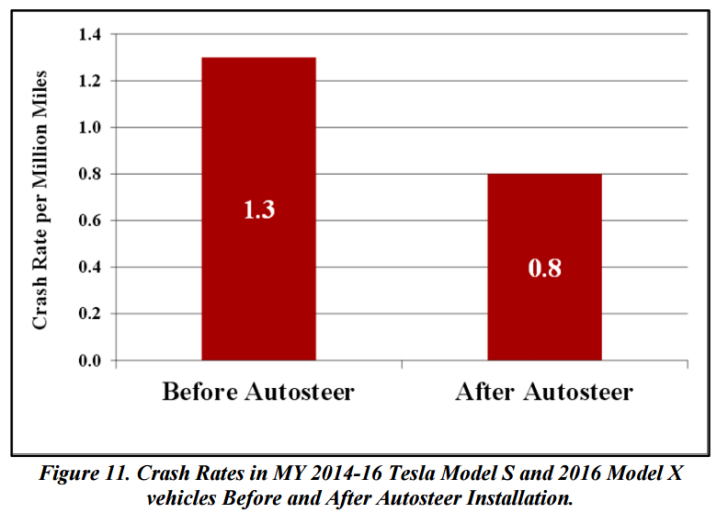