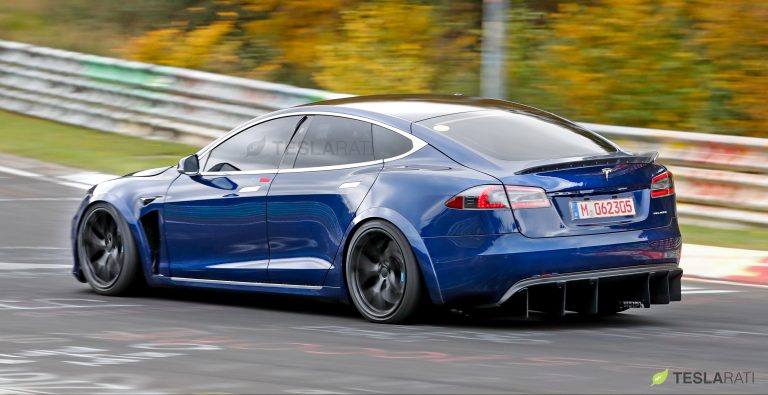 Tesla brought a couple of weird-looking Model S prototypes to Nordschleife racetrack in September for the first time. At first many claimed that was an attempt to grab the 4-door electric car Nordschleife record from Porsche Taycan, which set it several weeks before the global launch. However, the reality turned out to be a bit more complicated — while not giving up to show that Tesla still makes best electric cars, the automaker used the famous track to test a new drivetrain. In the middle of October Tesla team came back to Germany with upgraded cars.

The new drivetrain is called Plaid. This feature includes everything we know so far about it, according to the facts claimed by Elon Musk and the information from witnesses at Nordschleife.

Model S Plaid will be a new modification of the Tesla’s flagship vehicle, that should dramatically differ from the original car. The exterior is the thing we can’t miss here.

Model S Plaid is getting a widebody aerodynamic kit to fit huge wheels with light forged rims. The aerodynamics is another thing, being supported by a huge air vent in a front bumper, diffuser, rear spoiler and other elements. Taking to consideration how the prototypes look, Model S Plaid should have a really aggressive design. 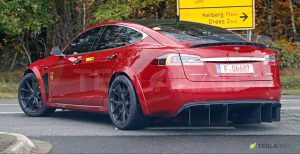 There is no specs yet announced, though it’s true that Plaid will feature 3 electric motors. Most likely, two of them will be located in the rear, and one in front – the same configuration as in a next-gen Tesla Roadster. It even may be possible that a new Roadster would have exactly same motors. 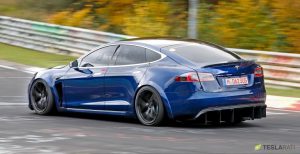 Racing on a track seems to be the Model S Plaid destiny. Much attention is paid to the battery and motors durability — witnesses claim Plaid prototypes to be making 5-6 laps of a 20 km long Nordschleife in a row without any loss in performance.

It’s possible that Plaid version may have several trims with different power. This turns out from the fact two Tesla prototypes showing different lap time in Nordschleife — the blue Model S Plaid made its best at 7 minutes 40 seconds, while the red one finished its best lap in 7:23. 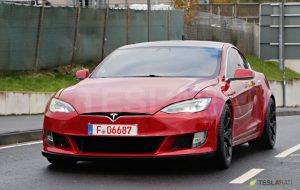 Production launch and the price

After the first round of Nordschleife tests Elon Musk claimed that Model S Plaid is scheduled to enter production in summer 2020.

Though, the price is not so clear yet. Musk said Model S Plaid is expected to be more expensive than Model S Performance, but cheaper than its competition (meaning Porsche Taycan). So it may be safe to predict the Plaid’s retail price to be between $100-150k.